The 2014 Utah general legislative session is in the books.  Our State constitution instructs that the legislative session will last for 45 days - not one minute longer.  On March 13, at midnight, we finished our work.  Needless to say, things went fast and furious this last week.  Due to the high number of bills, they were prioritized, and we voted on as many as we could.  Thank you so much for all of your support.  It is truly an honor to represent the great residents of District 33.  Click on the above link to review some highlights of the Session!

Here are a few of the more interesting bills we voted on this last week:

I had several bills this session.  Here are a few:

This bill was one of the most significant pieces of ethics/campaign finance reform bills of the 2014 session.  It has several provisions, including fines for not reporting campaign contributions on time, tighter deadlines for reporting contributions closer to the date of the election, increased rules regarding lobbyists, and increased disclosures of campaign finances.  This bill passed the House 69-1 and the Senate 25-0.  Thanks to all those who helped with this bill.

Here are a couple news article about the bill: http://www.sltrib.com/sltrib/politics/57678978-90/attorney-bill-com-html.html.csp and http://www.deseretnews.com/article/865598645/Lawmakers-pass-political-transparency-bills.html

Here's a photo of the actual bill: 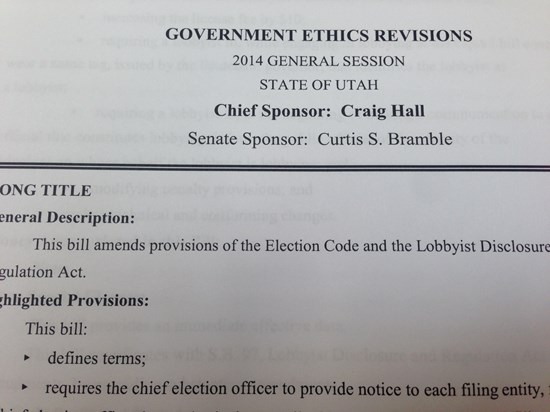 HB84 would have protected communities from unfair school district splits. It prohibited cities from cherry-picking its best tax base and creating its own school district, leaving their less affluent neighbors high and dry.  This bill is an example of how I will always fight for the families, students and taxpayers within District 33.

Thanks to Mayor Ben McAdams and Aimee Winder Newton (newly appointed member of the Salt Lake County Council) for recognizing how important this bill is for our community, and coming to testify in support of the bill! It passed the House committee 10-3, and passed the full floor of the House 56-14.  Although it passed a Senate Committee 5-2, it failed its last vote on the senate floor. Here's are the latest news report about the bill and a screenshot from one such report.
http://www.deseretnews.com/article/865598445/Bill-requiring-revenue-equity-for-school-district-splits-fails-in-Senate.html 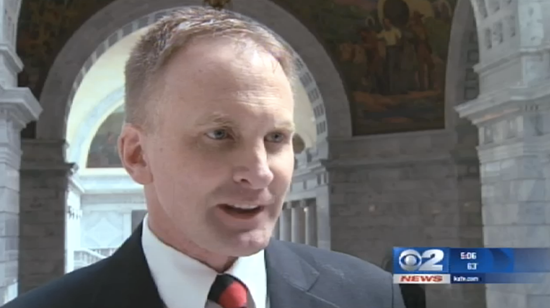 This bill protects children in cases where one parent is the primary suspect in the dearth of the other parent. Some have referred to this bill as the "Josh Powell" bill.  Passed unanimously (both Senate and House). Off to the Governor for his signature! See this article for a better explanation: http://www.deseretnews.com/article/865597997/House-sends-Josh-Powell-bill-to-governor-for-signature.html

The State Constitution mandates that in order to be the attorney general, one must be a resident of Utah for 5 years.  After the resignation of the previous attorney general, there were several candidates that applied whose 5 year residency requirement was at least somewhat in doubt.  This legislation provides better guidance to election officials to determine whether someone has actually met the residency requirements. This passed 70-4 in the House and 24-0 in the Senate.

This bill clarifies that municipalities may impose a penalty ONLY up to a Class B misdemeanor, and also clarifies that there are no minimum penalties for infractions, Class C, or Class B misdemeanors.  The ambiguity in the current State Code was brought to my attention by the Utah Sentencing Commission and they asked me to run this bill to clear up the ambiguity.  It passed the House 65-0 and this week passed the Senate 27-0.

This bill authorizes a County to make certain expenditures in the event of a natural disaster or a fiscal emergency (such as the government shutdown that occurred last Fall).  This is a great bill that allows spending flexibility in the event of an emergency, and still adds certain taxpayer protections so that the flexibility is not taken advantage of.  This bill has passed both the Senate and the House.

This bill approved a major push for science, technology, engineering and mathematics education in the state with additional appropriations to the STEM Action Center. This bill is part of the emphasis of making sure we better prepare Utah students for high-tech jobs. Every year, Utah companies have to look outside of Utah to hire their high-tech employees because we simply don't have enough highly trained applicants from within the State of Utah.  This is major push to change that.

This bill is one of a host of air quality bills that were passed.  In order to incentivize the public to buy and use electric vehicles, there needs to be a convenient way to re-charge such vehicles.  This bill removes a legal impediment that made it difficult for gas stations to sell and charge for electric charging at their stations.  Passed unanimously in both the House and Senate.

This bill would have slightly changed the process we use as a legislature to pass bills. It will provide for a more deliberative process, more chance for legislators to review bills, and give the public more opportunities to speak in favor or against the bill. Here's a news article regarding this bill: http://utahpolicy.com/index.php/features/today-at-utah-policy/1727-lawmakers-look-to-tweak-legislative-process.

The regular Session is done.  There's a chance we could have a Special Session, or a veto-override Session.  But other than that, all the legislators (including me) will go back to their regular lives and jobs for the rest of the year.  We do meet in "interim sessions," which happen one day a month, to discuss possible bills, to study issues, and to recommend bills to the Senate or House for consideration. If you have an issue that you would like to discuss, or you would like me to look into some topic for next year's Session, please feel free to contact me at any time.  I will still have the occasional Town-Hall meeting, and I will keep you informed on when those will be held. I will also send out email updates after each "interim session."  For those that want more frequent updates follow me on Twitter at www.twitter.com/hcraighall or on Facebook at www.facebook.com/votecraighall

We stayed to work on bills until 12:00 midnight on March 13.  This is a photo of the Capitol at 2:00 a.m. after I left the Capitol.  It has truly been an honor to represent District 33.  Thank you for the opportunity! 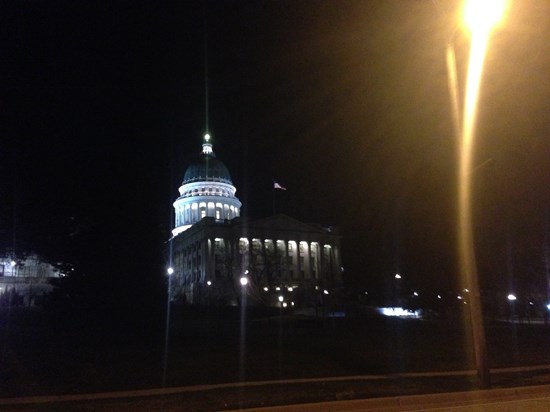