Thanks again for all your support.  I truly appreciate all the emails, phone calls, returned surveys, Facebook comments, and any other way that you are able to reach out to me. Again, feel free to contact me anytime if you have any questions, concerns, complaints or comments.

Since the end of the Legislative session in March, we have seen both the Caucus Night and the Salt Lake County Republican and Democrat Conventions come and go.  Thank you to all who attended their Caucus Night and especially those who have been serving as delegates on behalf of their neighbors.  I am very pleased to have received the Republican nomination and will move on to the General Election in November.

Following the completion of the general legislative Session begins the off-season, or "Interim" Session.  Once a month we meet in committees comprised of both House and Senate members and begin to craft and discuss proposed legislation for the 2015 session and other issues on the Master Study list.  Over this interim period I will be serving on the Judiciary and Political Subdivisions Interim Committees.  Our first Interim Session will be on May 21, 2014. Here's the schedule if you're interested: http://le.utah.gov/interim/2014/pdf/00002875.pdf

If you have issues or concerns please contact me.  I am already working on several pieces of potential legislation with constituents for the 2015 session and would love to hear from you.

As you may recall, this last Session, I was the chief sponsor of the most comprehensive legislation in several years regarding campaign finance laws and campaign ethics.  See the bill here: http://le.utah.gov/~2014/bills/static/HB0246.html

A couple weeks ago, I received a personal "thank you" note from the Lt. Governor's office (which is in charge of regulating and enforcing Utah's election laws) for the work I did on this bill.  The bill was labeled a "huge step forward."  We were all embarrassed by what happened with the Attorney General's race in November 2012.  This bill closes many campaign finance loopholes, establishes harsher penalties for breaking the rules, and implements stricter ethics rules throughout the entire Utah political arena.

Thanks to all those who helped pass this bill! 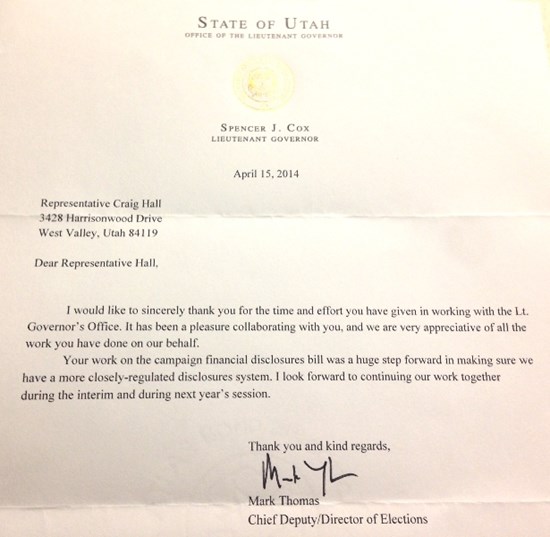 So instead of complaining and blaming others for the problem, this last Session I was part of the bipartisan "Clean Air Caucus" in an effort to help find solutions to improve our air quality. As stated by Rep. Patrice Arent (Democrat), we passed more meaningful clean air legislation this Session than the last 13 legislative Sessions combined.

Last week Governor Herbert signed several of these bills. Air quality in Utah is a very complex issue, and we still have a long ways to go. But this last Session we made some big strides. Thanks to all who helped!  Here are some photos from the ceremonial bill signing last week. 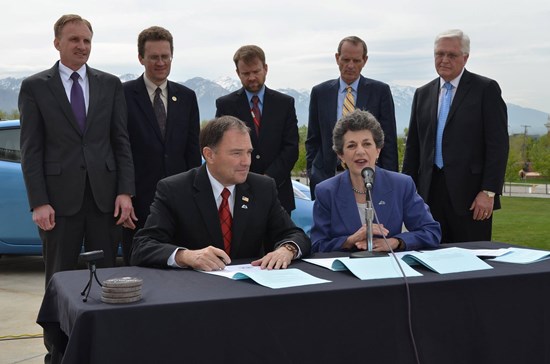 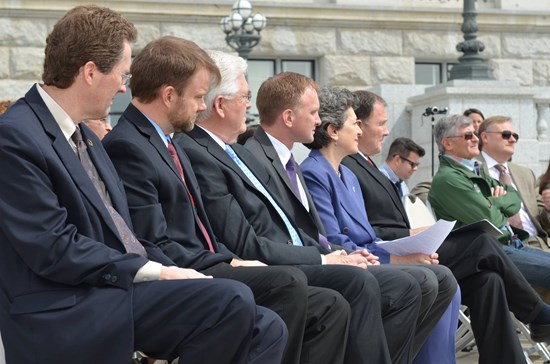 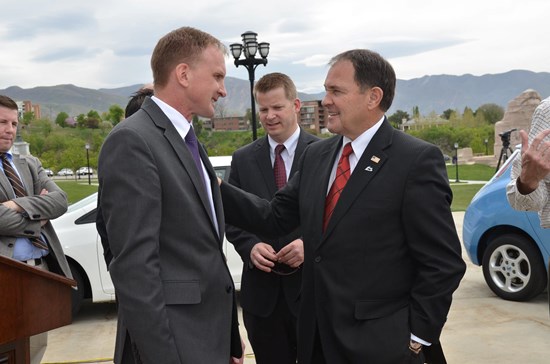