Week 5 Summary
Extremely busy week! Thanks to everyone for reaching out over the last few weeks, letting me know how you feel about the issues.  Less than two weeks left!
Special Events at the Capitol

This week, many of the police chiefs throughout the state visited the capitol. West Valley Police Chief Jacobs was nice enough to chat with Rep. Winder and me for a while about the West Valley Police Dept. and our City. Thanks for coming! 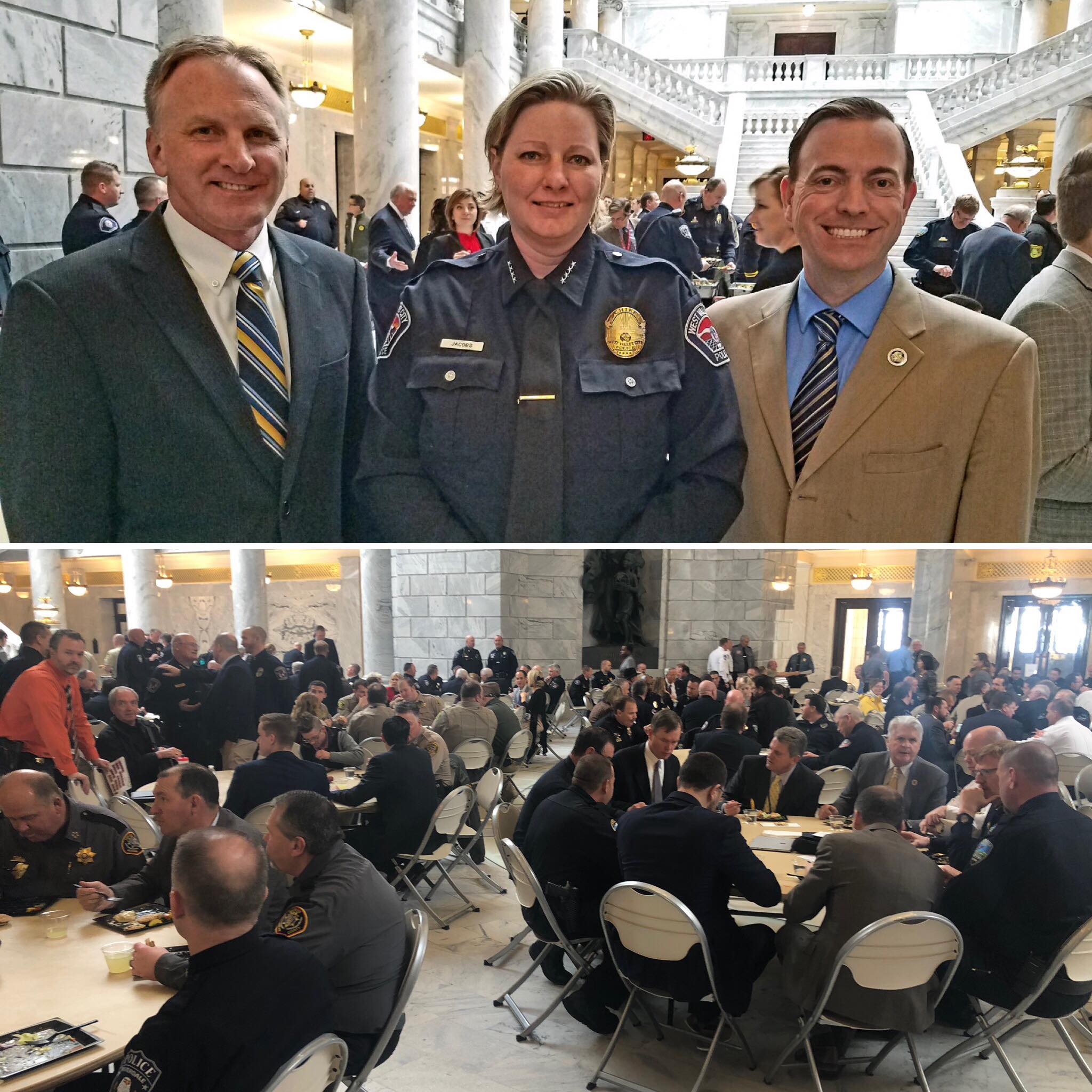 It was great running into and talking with Mayor Bigelow this week. Thanks for coming and continuing to look out for WVC's interests! 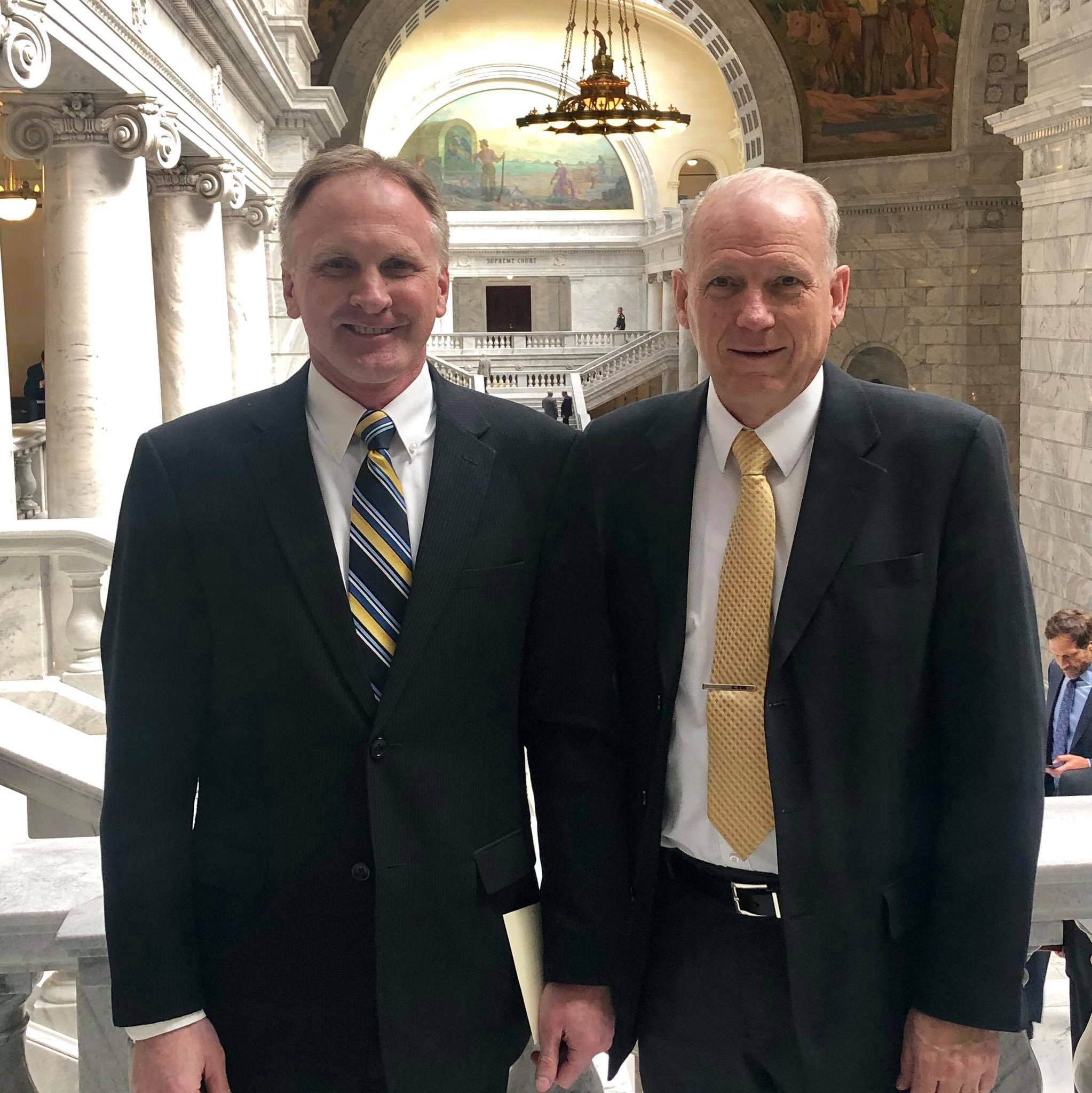 2019 Legislation This last week we continued the process of voting on non-budget bills.  Of course, you can always watch the new reports.  But the best way to track any legislation is at the Legislature's website at http://le.utah.gov.  Here are a few of the more interesting bills that were discussed this last week: Rep. Hall's Legislation I have several bills this session, here are a few: States are divided as to whether campaign funds can be used for childcare while campaigning. Federal law allows it for federal campaigns. This bill would make clear that in Utah, campaign funds may be used for childcare expenses while campaigning.  Rep. Stephanie Pitcher (Democrat) and I are jointly sponsoring this bill.  There are so many wonderful people and leaders in this State. And they shouldn't be discouraged from running simply because they have childcare responsibilities.   See story here.  This bill seeks to apply the same 4th amendment protections that we have in the paper and physical world, to the digital world. So much of our communication and information is now in digital and electronic format. And a lot our personal information is stored with third-parties (Dropbox, Google Drive, etc.). This bill simply would require law enforcement to seek a warrant from a judge if they want access to such digital information.  See story here.    This bill allows notarizations to be performed remotely. Currently, notarizations are only allowed to be performed in-person. Beginning November 2019, you'll be able to perform a notarization through your smart phone. Fantastic bill. Several states have already adopted remote notarizations.   This bill is in response to an audit performed by the State Adutior's office. One recommendation that came forth after the audit was to clarify Utah law that it is unlawful to use government property for personal use. Here is a story explaining the issue.   This bill is to clarify how old a legislator has to be. The state constitution says that a legislator must be 25 years of age. But it does NOT say by when he/she must be 25. At the time of filing (in March)? At the time of the election (in November)? At the time he/she assumes office (in January)? This bill clarifies that the legislator must be 25 years old "at the time of election" (in November. This bill would require seat belts on new school buses starting in 2020. This issue can be summed up by a quote I made during the hearing. "It's silly and interesting that we require by law all children and all adults in our own personal vehicles to wear seatbelts. … But for some reason, we find it perfectly acceptable to put kids in buses with no seat belts at all," Hall said. Here are some stories on this issue: DNews ABC4 SLTrib

Conversion therapy is a medical practice or treatment meant to change sexual orientation. It has been rejected by major medical groups including the American Medical Association, the American Academy of Pediatrics, and the American Psychological Association, among many others. Study after study has shown that such a practice is ineffective and very harmful.  A recent study showed how LGBT youth subjected to conversion therapy were two times more likely to experience depression and nearly three times more likely to attempt suicide.   15 states have already prohibited this practice. Hopefully Utah will be the 16th. I greatly appreciate all who have reached out, thanking me for running this bill. I am cautiously optimistic we will be able to pass this bill this Session. 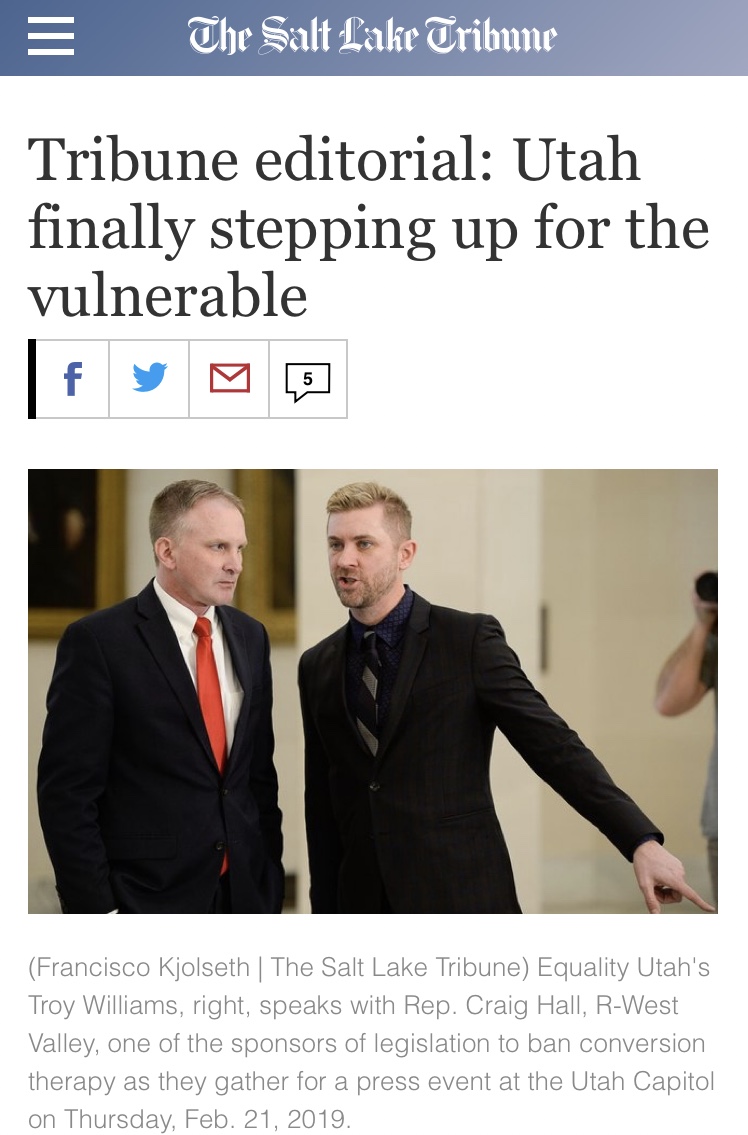 I've held three Town Hall since the session began.  Thanks to those who attended!.  Great comments and questions. Thank you!!! 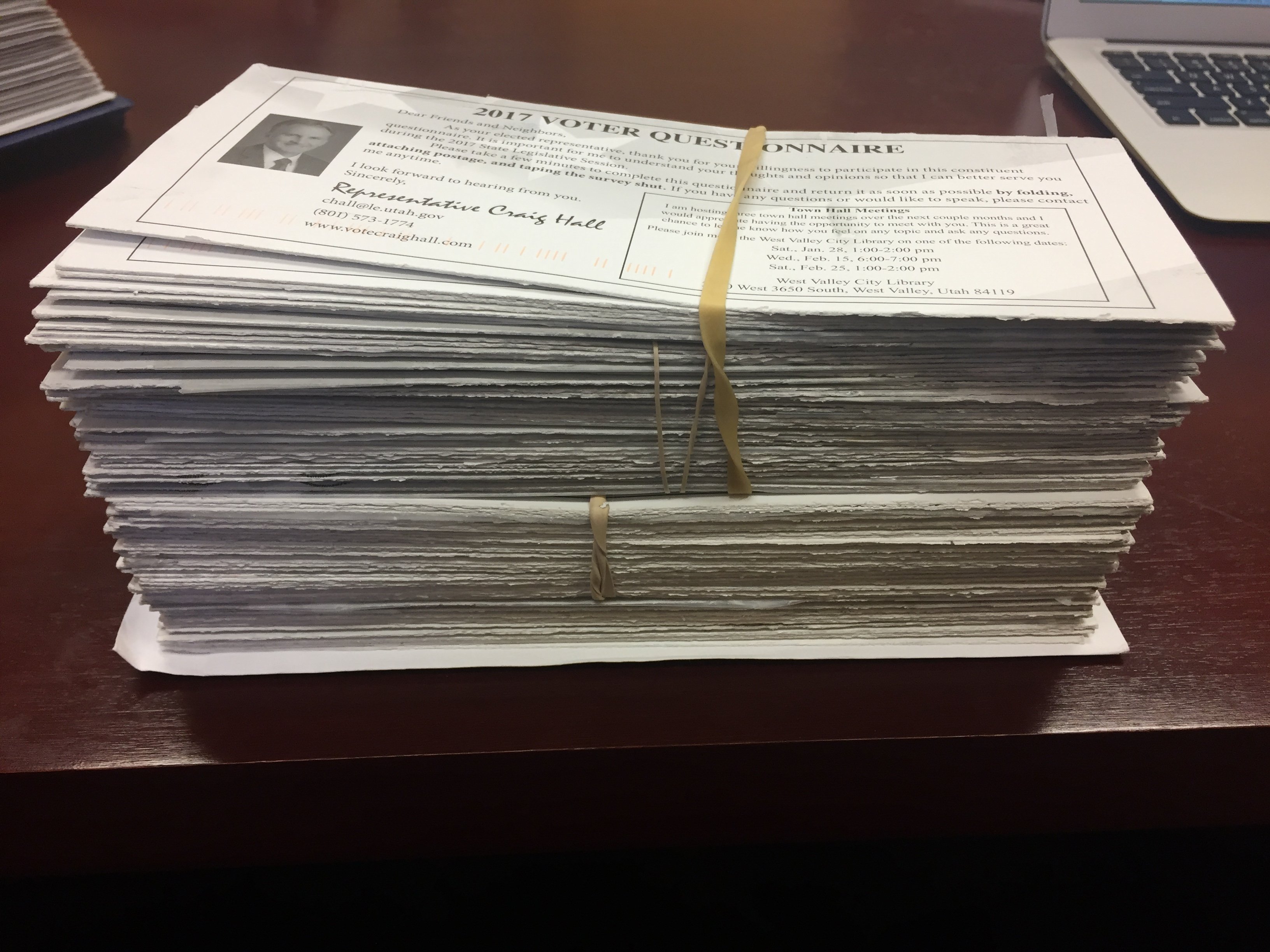 Medicaid As you may have heard over the last few weeks, much discussion at the Capitol was focused on Medicaid. In November, the voters passed Proposition 3 which expanded the number of Utahns that are eligible for Medicaid.  In District 33, Proposition 3 prevailed by almost 30 percentage points. There has been been some effort this session to modify what was passed by the voters. After a lot of study, thought and public input, I ended up voting NO on the bill that will modify Prop 3. Thanks to everyone who reached out to me over the last few weeks regarding their thoughts on the issue. I greatly appreciate it.  Sales and Income Tax Utah faces a serious problem with its current tax system. Sales tax (also called our "General Fund"— which is used to pay for critical services such as Medicaid, transportation, public safety, etc.—is not keeping pace with Utah’s rapid growth. The state’s economy is experiencing a dramatic shift from a manufacturing and goods-based economy to a service-based economy. Furthermore, the state is experiencing extraordinary growth as families and businesses recognize the state as an exceptional place to live and work. As the population grows, so does the demand for funding for social services, water, transportation, and other critical infrastructure needs.    To resolve this issue, legislators have engaged in extensive and ongoing discussions regarding sales tax reform. This week, theTax Equalization andReduction Act (HB 441) was introduced, marking the first major step in the process of restructuring Utah’s current tax system.   HB 441 aims to broaden the sales tax base to include services while also lowering the sales tax rate significantly, from 4.7% to 3.1%.  The bill will also result in a sizable tax cut and lower the income tax rate from 4.95% to 4.75%. This tax cut will level the playing field across industries and produce critical revenue to fund future growth in the state. Additionally, as new services and industries come into existence through entrepreneurial innovation,  The average family is projected to save $600 a year.  Those savings will come from lower income taxes and saving sales tax on purchasing products ranging from new cars to laundry detergent.    HB 441 also creates an added benefit to education funding by stabilizing General Fund revenue for the future and enhancing funding to education in the short-term. In short, HB 441 will ensure future economic stability and prosperity for Utah as the state continues to grow. HB 441 is an example of the legislature’s desire to take the long view, plan for the future, and craft responsible public policy. Here is a fantastic video that helps explain this issue even better. Click the image to view: 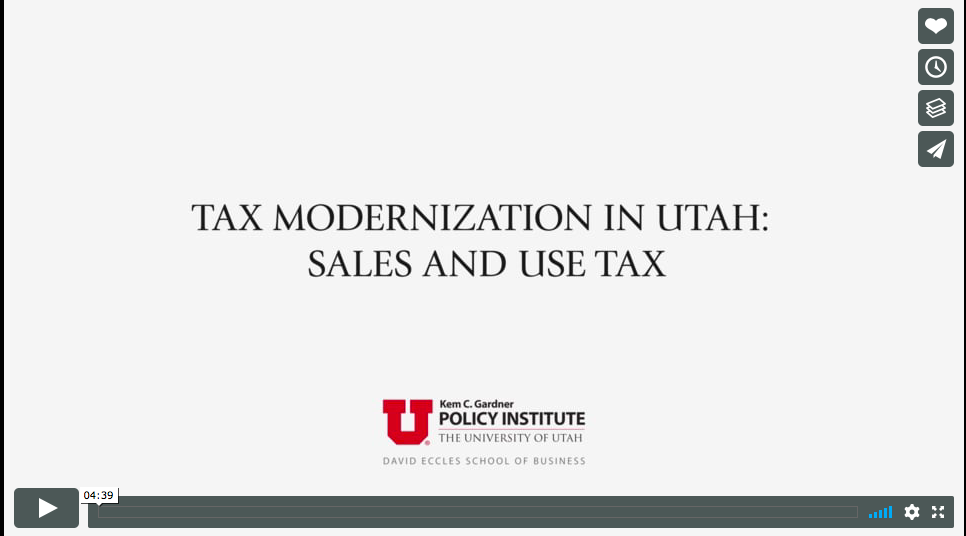 Visits to the Capitol!
One of our State's treasures is the State Capitol building.  And visiting during the legislative session is the best time of year to visit.  Lots of action happening every day.  I would love to give your family / school group / church group / etc. a behind-the-scenes tour of the State Capitol.  Give me a call/email and we'll make it happen. Thanks for. visiting! Here's a shot from the "snow day" this week.
Ways to Contact Representative Hall I make a concerted effort to reach out to all of my constituents.  For that reason, I use as many different forms of communication as possible.  Most of you have received mail from me.  I also have frequent town hall meetings (more on that above).  You can follow me online at www.votecraighall.com.  For even more frequent updates, you can follow me on Facebook at www.facebook.com/votecraighall and/or on Twitter at www.twitter.com/hcraighall.  You are also welcome to call my cell phone anytime.  (801) 573-1774.  I will be in many meetings throughout the legislative session, so if I don't answer right away, feel free to leave me a message and I'll try to call back as soon as possible.  I will also be sending out regular updates via email.  Probably the quickest way to get ahold of me is by email.  My legislative email address is chall@le.utah.gov. Thanks for your support. Contact me anytime. Read all previous email newsletters here: http://bit.ly/YJCYy1 Representative Craig Hall Legislative email: chall@le.utah.gov Personal email: hcraighall@yahoo.com Website: www.votecraighall.com Facebook: www.facebook.com/votecraighall Twitter: www.twitter.com/hcraighall Cell phone: (801) 573-1774
Paid for by the Committee to Elect Craig Hall
Powered by CampaignPartner.com - Political Websites
Close Menu