The 2017 General Session of the Utah State Legislature is more than half-way done.  Thank you so much for all of your support.  It is truly an honor to represent the great residents of District 33.  Just a few highlights from the week: Special Events at the Capitol 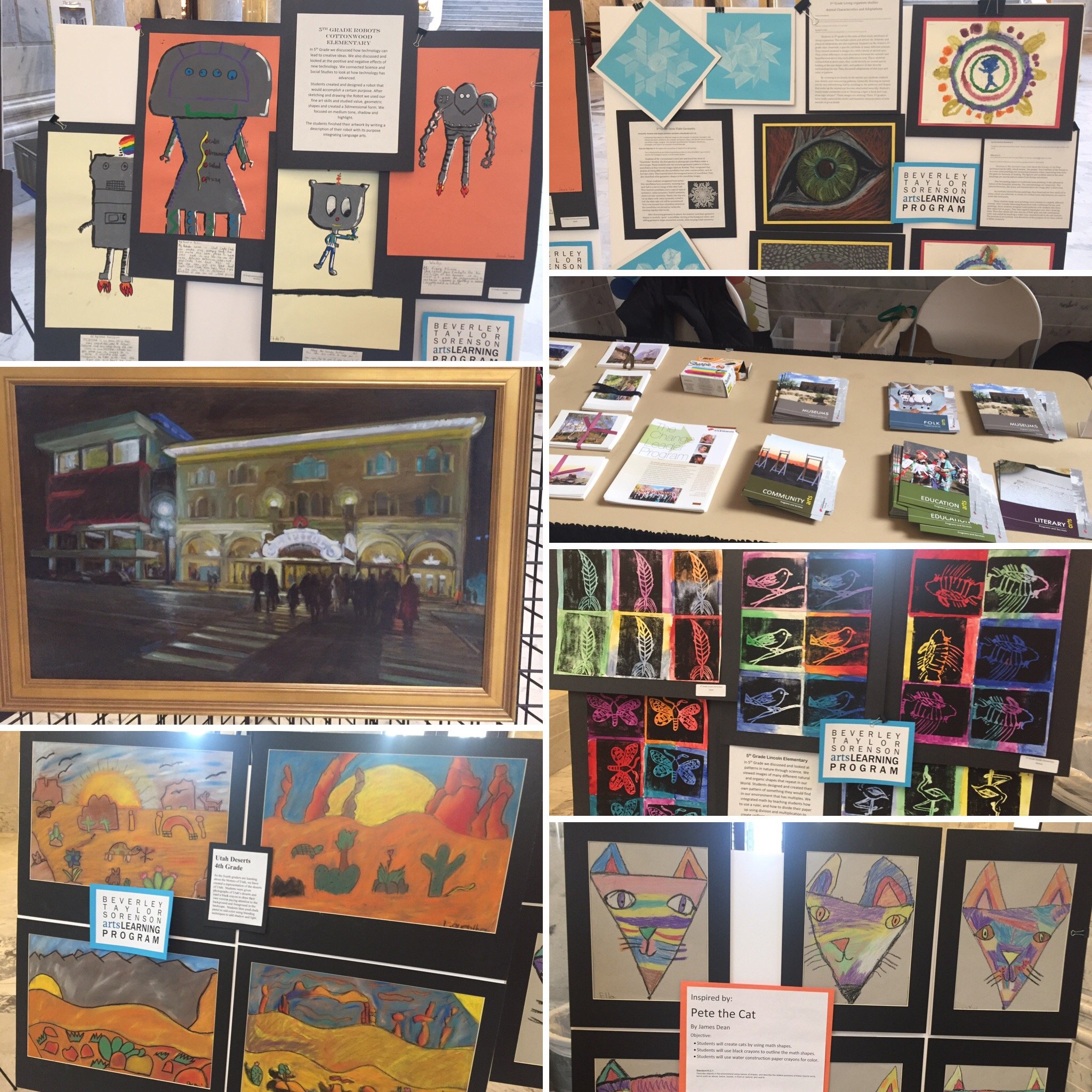 We love having folks visit the Capitol during the Session.  This week it was students from Granger High School.  Specifically, it was Granger's Island Teens Against Tobacco group.  They came to express their views regarding the dangers of tobacco.  Thank you for coming! 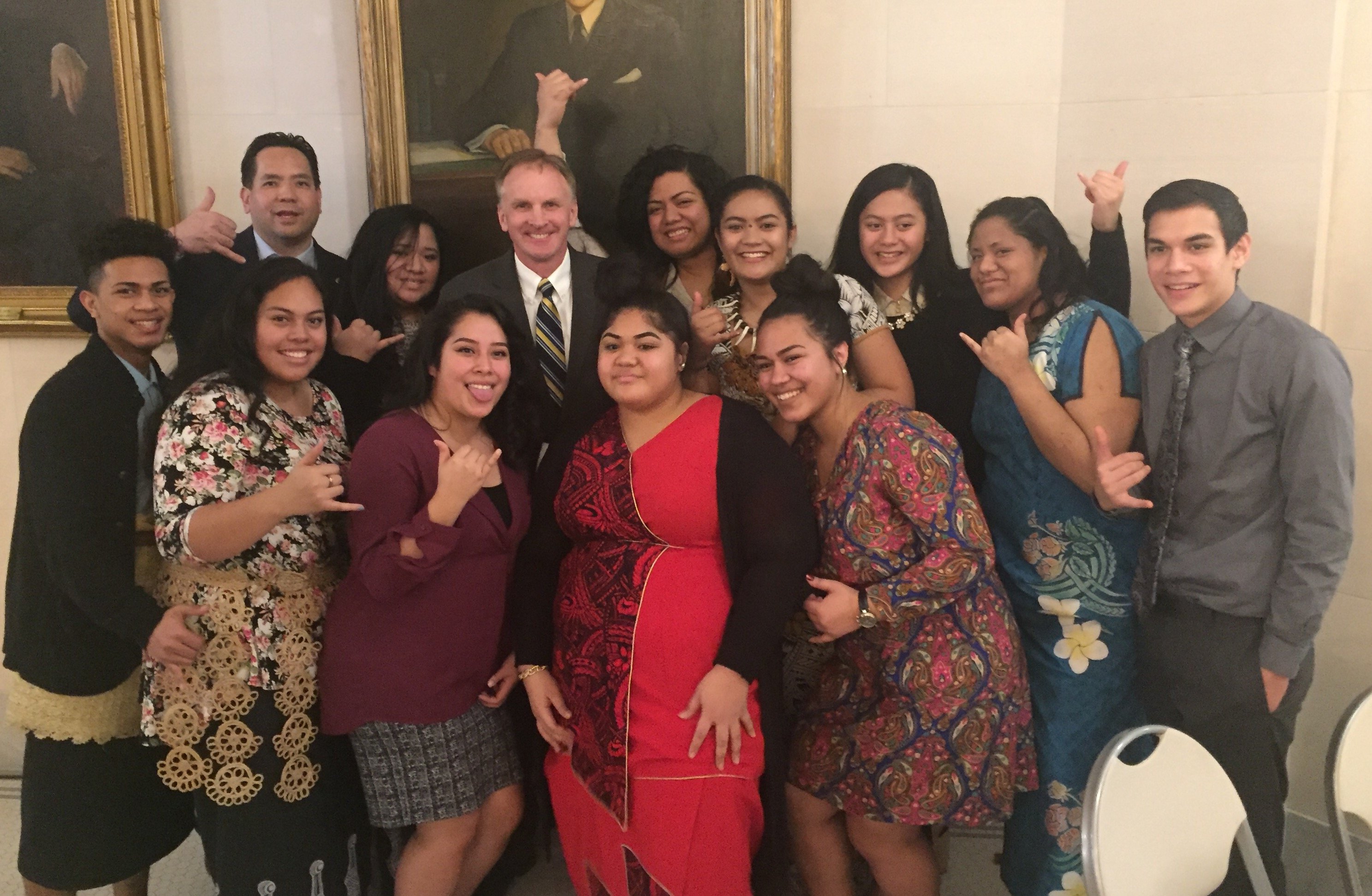 Often times, there are issues at the Capitol that disproportionately affect West Valley.  Here is a photo of Mayor Ron Bigelow and I advocating for West Valley at the State Capitol during a committee meeting.  Thanks to Mayor Bigelow for his efforts! 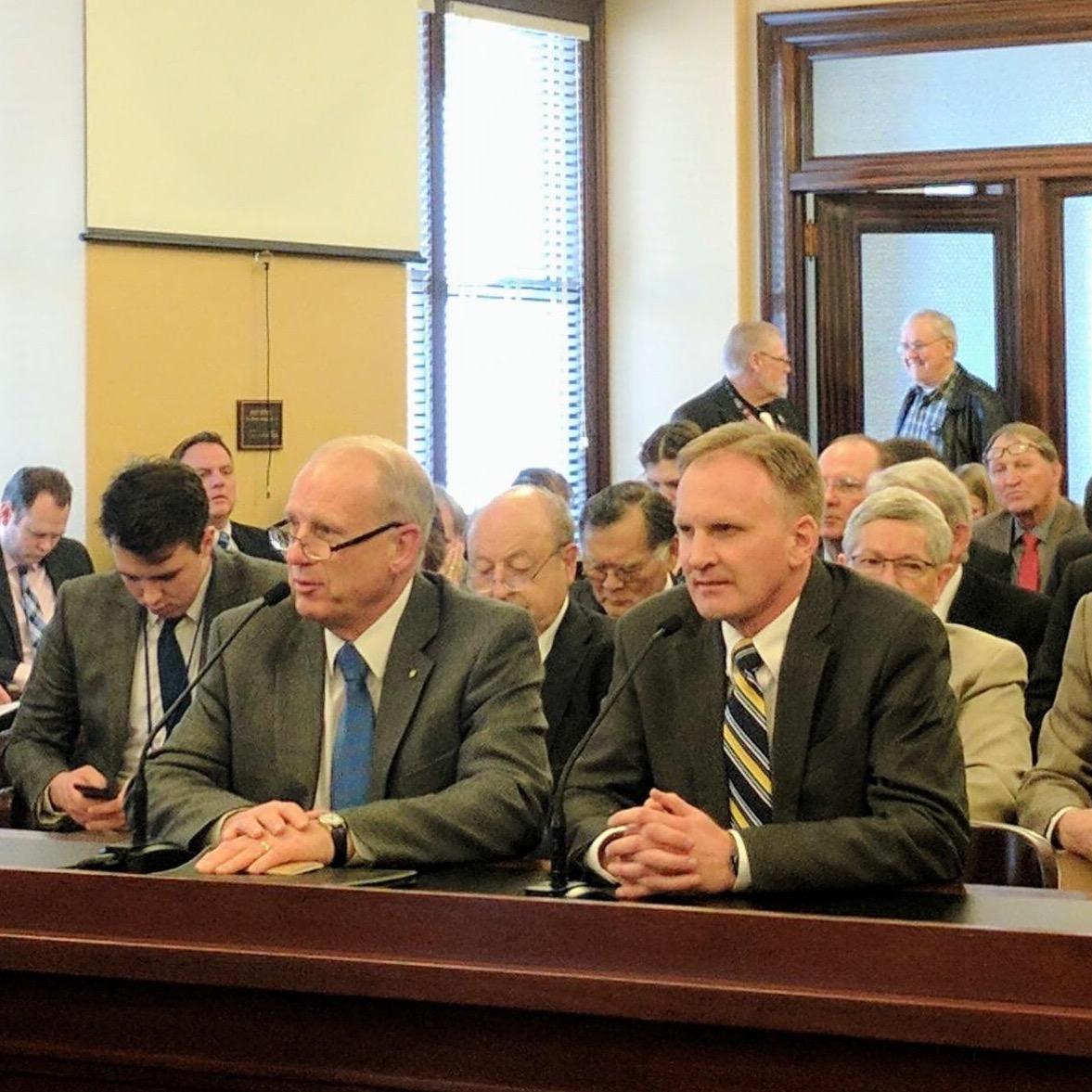 One of our State's treasures is the State Capitol building.  And visiting during the legislative session is the best time of year to visit.  Lots of action happening every day.  I would love to give your family / school group / church group / etc. a behind-the-scenes tour of the State Capitol.  Give me a call/email/text and we'll make it happen. Thanks for. visiting! 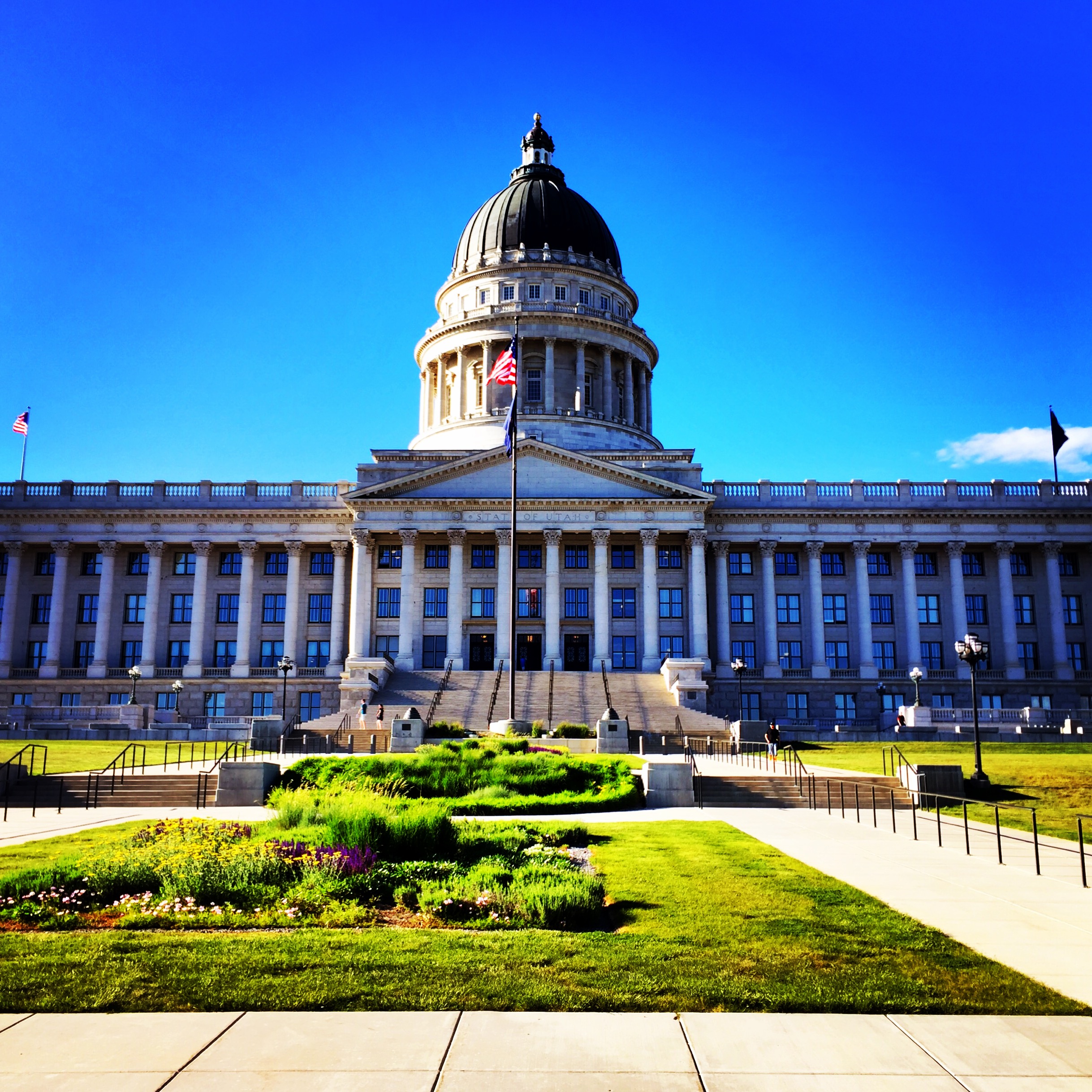 2017 Legislation This last week we continued the process of voting on non-budget bills.  Of course, you can always watch the new reports.  But the best way to track any legislation is at the Legislature's website at http://le.utah.gov.  Here are a few of the more interesting bills that were discussed this last week:

Rep. Hall's Legislation I have several bills this session, here are a few: This is a relatively simple bill which helps make sure that voters don't get kicked off the voter rolls due to a technicality.  I was asked by the Lt. Gov.'s Office to sponsor the bill and I am happy to help them achieve this goal.   State law currently allows early voting from two weeks before Election Day, until Friday before Election Day. This bill would extend early voting until Monday before Election Day.  I was asked by the Salt Lake County Clerk's Office to run this bill. This is a great bill which will give more options to Utah's voters.  Here's some press coverage regarding the bill. [SLTrib] This is a bill that clarifies how to determine damages in the event of securities fraud. I was requested by the Utah Attorney General's office to run this bill.   Some of you may remember the long lines on Election Day.  Last November, the Clerk's Office wanted to open more poll locations, but there was a notification deadline that had already passed - effectively prohibiting the Clerk's Office from opening more locations.  This bill will allow the Clerk's Office to open a poll location at the last minute if they determine more locations are needed. Did you know your child is not allowed to bring sunscreen to school unless he/she has: (1) a parent note; and (2) a doctor note?  Ridiculous, I know.  The reason this is the case is because sunscreen is considered a "medicine," and medicine is not allowed in school.  This bill will allow your child to bring sunscreen to school without going through the hassle of a doctor note and a parent note. Here is some press coverage regarding the bill. [DNews] This bill would require seat belts in new school buses (model year 2017 buses and newer).  I was first introduced to this issue when a friend of mine, while I was living in Texas, had a daughter who was seriously injured in a school bus that tipped onto its side while on their way to a soccer game. Two of her teammates died as a result of the accident.    I appreciate all the feedback I've received regarding this bill.  I've been in close contact with the school districts discussing ways to improve the bill.  Thanks to all those who have reached out.  Here is an article regarding the bill: [SLTrib] Administrative Law Judges adjudicate items when a citizen has a dispute with a government agency.  Currently there is no requirement for these judges to be law-trained.  These judges deal with issues that are legally complicated (health code, insurance code, etc.) and I believe it is best practice for these individuals to graduate from law school before they rule on legal rights for Utah citizens. There are hundreds of cities and towns throughout Utah. Each of them can set their own per diem rates.  This bill will cap the per diem rates at the State rate. This will help avoid excessive reimbursements to city officials throughout the State. Town Hall Meetings! We had our first two Town Hall meeting on Saturday, January 28 and Wednesday, February 15.  Thanks to those who attended and asked great questions.  I have one more Town Hall meeting scheduled during the legislative session.  All Town Hall meetings will be at West Valley Library (2800 West 3650 South). Hope to see you there! Please return your survey! I have mailed a survey to constituents within District 33.  The answers you provide to these survey questions are invaluable.  Please, please, please fill it out and return! (Below is a photo of some of the paper surveys that have been returned!). I am very interested in your perspectives. Your comments and thoughts are greatly appreciated.  You can also take the survey online at https://www.surveymonkey.com/r/RepHall2017 if you prefer that method.  Thank you so much! 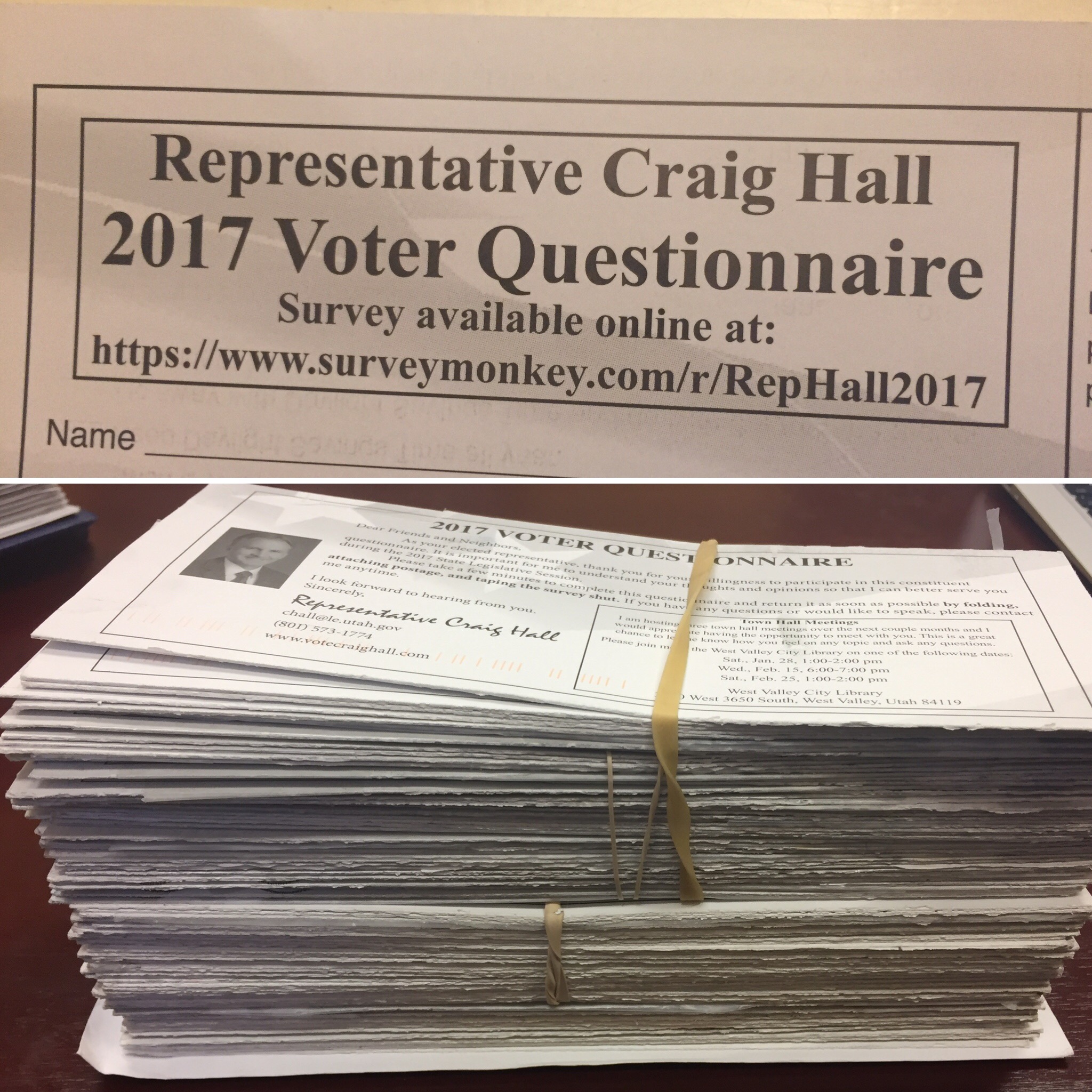